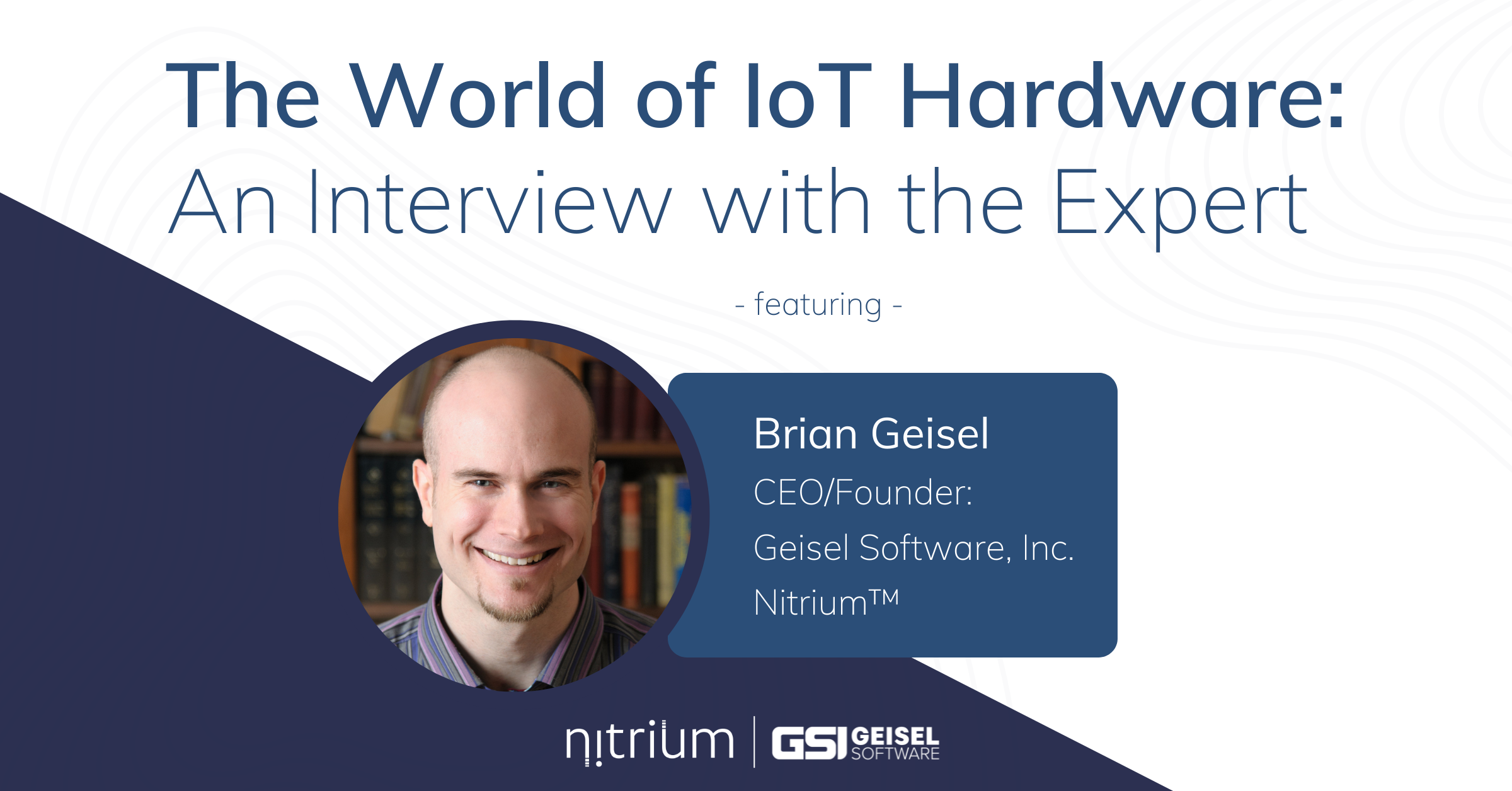 We sat down with IoT expert Brian Geisel, the founder, and CEO of Geisel Software, Inc., to pick his brain about the state of IoT hardware today. In this article, we’ll cover our discussions on:

→ How to select the right IoT hardware

→ The available options for IoT hardware are expanding rapidly and getting more and more universal.

→ You no longer need to DIY every piece of hardware, especially when prototyping. I.E., don’t reinvent the wheel.

→ SWaP: Size, Weight, and Power. Consider the balance between the three factors when developing a hardware and software platform.

→ Before you commit a lot of time or money to the development process, consider accessing expert consultation from a company like Geisel Software, it might just save your project!

Q: Brian, thank you for joining me to discuss IoT hardware. Can you tell me a bit about your background in IoT?

A: Thanks for having me! So I started many moons ago doing Linux Kernel development, device driver development, and embedded development, especially in the data storage world. I then moved into connected devices, then robotics, and actually did some work with a robotics company, right around 2006, and 2007. In 2008, the iPhone came out, and just before that, we were doing web-based development and we realized that the web was getting to a place where you could actually control a robot from the web or at least configure the robot. Because of the leaps in mobile technology, I started writing mobile apps and pretty quickly realized that the market wanted to connect those apps to robotics to control them. So, my background is built on a solid foundation in embedded systems and a long track record of mobile and web app development.

Q: Can you tell me about the IoT sphere today and speak specifically to IoT device hardware? What’s going on with that space now?

A: Some of the moving parts here are shrinking battery sizes, increasing processing power, and increasing bandwidth, especially wireless bandwidth. The other thing that’s happened in hardware is improved availability. It used to be a hundred percent build your own hardware. You would have to have an electrical engineer design your entire hardware board from scratch and try to figure out the processors that they were gonna put on it. This approach typically involved months worth of troubleshooting and the other issues associated with homebaked solutions.

Today, we have things like the ubiquitous Raspberry Pi, and now the Raspberry Pie Zero which added wireless capabilities and a much smaller board. There’s also the Pico. The footprint just keeps getting smaller and the hardware is getting cheaper.

A: That’s very true. And not only is the sphere itself for those kinds of things expanding rapidly, but the time it takes to get a product to market is decreasing rapidly. There’s still a lot of time in the manufacturing. So, if you’re building a product, you really need to plan for the manufacturing cycle time. But in terms of building the product, where you used to need a year of electrical engineering time, today, you can just buy a Raspberry Pi, a Beagle Bone, or an ESP32, and the list goes on and on. Every year, Make Magazine puts out a list of dozens of IoT hardware components, that are currently available. Everything from the system-on-chip (SoC) to a full system that you might deploy with your device. It’s small stuff, very low power. With this kind of availability, you’re able to put product prototypes together that are really close to your final product. This means that prototyping time and time to market can be reduced dramatically.

How to Select the Right IoT Hardware

Q: For people out there developing IoT devices, how can they go about selecting the right device hardware?

A: Picking the right hardware for your project is huge. We’ve already covered how much the hardware landscape has changed from “do it yourself” to “pick it off the shelf”. Take advantage of that! Just go buy five different devices that look like what you might need. Spend $150 on those five devices. Try them out, and get a sense of the processing power of those things and how they’re set up.

So, the focus is shifting to where it’s less about building that piece that you need, and more about taking cues from the blueprints that are already out there. There’s still plenty of hardware to build, but it’s less about building that core piece and that processor for your platform. It’s more about selecting the right pieces that are out there and already available today. It’s all about knowing what’s available because you could end up building or paying someone to build something that could have just been bought off the shelf for $150. I think companies would do well to familiarize themselves with plug-and-play hardware options and take inspiration from existing platforms when applicable.

Q: So what’s the simple mantra we can use for selecting or developing hardware?

A: It’s called SWaP, which stands for “Size, Weight, and Power”. You have to think about how much power the device consumes, whether it’s on the grid or battery-powered, and then how often you’ll be able to access it to change the battery if need be, as well as the cost of doing so. You have to think about the size of the device as it relates to its use. Does the device have to be relatively small to properly function in its field environment? If it’s small and battery-powered, then efficiency becomes even more important. There’s a negotiation, a balancing act going on there.

Q: We have to mention the cost to the developer and consumer, which you spoke to a bit earlier. Where does that come in here?

A: Yeah, obviously cost is huge and what you mentioned was a really good point, being that you need to think about the cost to build the device. If you’re going to sell millions of devices, then you think about every penny you spend per device because it’s going to add up. If you’re only going to sell 10,000 devices, there are much different economics around that. You care less about every penny. But you might care more about the fixed costs like the cost of development because that will be amortized across the number of devices that you sell. So if you sell more devices, then you care a little bit less about fixed costs incurred through development, but more so about pennies saved per device. Like we talked about earlier, don’t go reinvent the wheel when a great wheel already exists in all forms and fashions. When you build a device, use hardware that exists, go see if some of that hardware fits your needs. When we at Geisel Software look at building software for a company, we do the same thing from a software standpoint. It’s not “what can we build here”? It’s “what already exists in the world that we can use and what parts don’t exist”? What is the truly unique part of your product that needs to be created for your product to work, and what are the parts where you can integrate things that exist in the outside world already? So, there’s an element of cost to the particular hardware, but there’s also an element of cost to building that out. That makes a big difference.

The other rule that comes up regularly is not creating your hardware and your software in isolation from each other. There are many times we at Geisel Software have joined a project where someone’s designing hardware and they’ve picked a particular Bluetooth radio, but that radio doesn’t have any support on Linux which is what their code is written on. So we can build a driver for that Bluetooth radio. We can build all that from scratch. That’s fine, but that will cost you months of development time and money. But, if the client had simply paid a few hundred dollars in consulting fees, someone like us at Geisel Software could have pointed that issue out and saved the client months of development time and money. So, make sure you’re thinking about how your hardware and software will get along with each other, they can’t be separate considerations.

To set up a free initial consultation with Geisel Software Inc. & the Nitrium Team, click the button below.